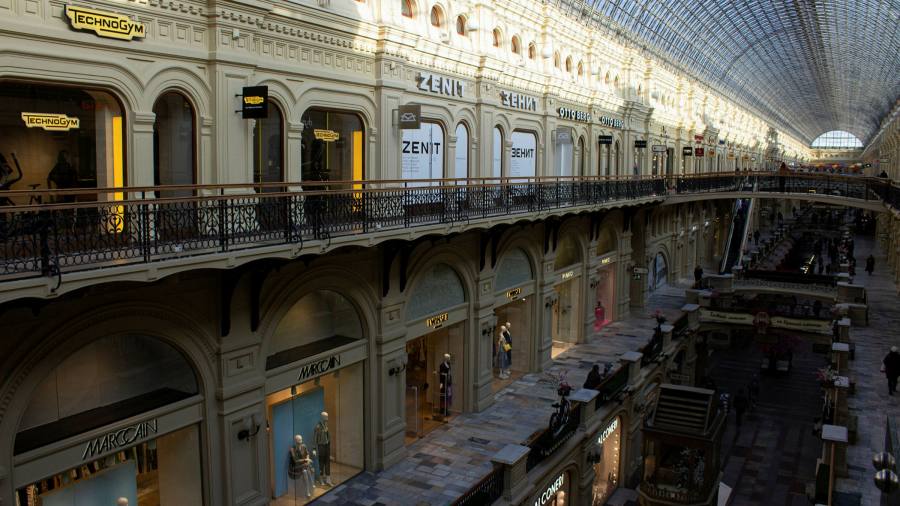 Western sanctions against Russia were aimed at isolating the country from the international financial system, but the economic offensive has also left international traders who hold shares in Russian companies cut off from their assets.

As Russian forces pushed into Ukraine, the US and EU unleashed waves of measures against companies and individuals they said had close ties to Vladimir Putin’s regime.

Among the first gestures were measures aimed at preventing Russian companies from raising funds in foreign markets, such as London or New York.

These prompted an equally forceful response from Putin: capital controls prohibiting Russian-based institutions from transferring foreign currency abroad. This, in effect, froze their assets inside Russia.

As nations clash in what amounts to economic warfare, foreign investors investing in Russia seem “caught between the proverbial rock and a hard place,” says Steven Hill, a partner at law firm K&L Gates.

At the end of 2021, foreign investors held Russian stocks worth $86 billion, according to data from the Moscow Stock Exchange. But the introduction of sanctions left them with a difficult choice: to divest themselves of the Russian market, like some of the measures required; or – where permitted – retain their assets but face uncertainty as to whether they could regain control of them.

Investors are already counting the cost to their portfolios. Russia’s biggest companies, such as Gazprom, VTB and TCS Group, found themselves with assets worth far less than they were at the start of February.

In addition, the war in Ukraine has dealt a severe blow to the integration of Russian companies into Western stock exchanges in recent years – mainly the London Stock Exchange, but also the New York Stock Exchange and the Nasdaq.

Shares of companies are often traded in foreign markets in the form of certificates of deposit, a type of bank certificate that securitizes ownership of the shares.

For the past two decades, London has been the predominant market for Russian companies to raise funds outside of Moscow. Thirty-nine Russian companies are listed in London and have raised $44 billion since 2005, according to financial data researcher FactSet.

This trend slowed in 2014, after the peak of the commodities boom and the imposition of initial sanctions against Russia in response to its annexation of Crimea that year. Now, however, the war in Ukraine has dealt an almost fatal blow to the relationship.

When Ukraine was invaded. Russian corporate stocks immediately turned toxic and Western sanctions left little time for international shareholders to divest. Meanwhile, banks not only worried about breaching sanctions, but also worried that their counterparts might not be able to settle their transactions or be hit hard by exchange rate volatility.

In the face of uncertainty and regulatory requirements to maintain an orderly market, many stock exchanges have suspended shares of companies incorporated in Russia.

London, home to Russia’s largest business cluster, has suspended 28 companies. Index compilers like FTSE Russell, S&P Dow Jones and MSCI, whose benchmarks are widely followed by fund managers, removed the affected stocks from their indexes at a price of zero.

At the same time, the Moscow Stock Exchange closed for almost a month when the war started.

When it reopened, investors found a very different market. Access for foreign investors was restricted. Activity had fallen sharply, making it more difficult to sell large blocks of shares. On the day the exchange restarted operations, private investors accounted for nearly 60% of the total trading volume, according to a statement from the exchange reported by Russian news agency Interfax.

The few other counters open to Western investors continued to close.

For example, certificates of deposit could represent shares listed in Russia because their certificate issuers held the underlying shares in the local market. As banks considered the implications of the sanctions, some, including BNY Mellon, later allowed holders of Russian receipts to convert them into local shares in nearly 20 Russian companies. This would at least allow fund managers to hold the stocks locally, even if they were difficult to trade.

However, Russia moved quickly to clamp down on this practice, passing laws to officially deregister and terminate most certificates of foreign deposit. To avoid a run, Russia’s central bank then limited the number of shares that custodian banks could convert, defending its decision in the interest of financial stability.

Or, as the central bank put it: “Such a practice may lead to a disproportionate increase in the supply of local stocks in the market, which may have a significant impact on prices and cause stock prices to decline. “.

Russian companies could ask the central bank for permission to keep their certificates of deposit programs, but only a few have succeeded. Gazprom, once among the most actively traded stocks on the LSE, is ending its London and Singapore receipts in May after its application was rejected.

Restrictions may not be permanent. At the end of April, the deputy governor of the Russian central bank, Alexei Zabotkin, indicated at a press conference that Russia will slowly relax capital controls when the market stabilizes.

And the stocks, and the associated cash, haven’t gone away.

Euroclear, the Belgium-based central securities depository, said its balance sheet grew 80% in the first quarter, year-on-year, to nearly 23 billion euros. This, he says, is because he accumulated coupons, dividends and buyouts from Russian companies, but was unable to pass them on to sanctioned parties.

Even so, few take much of a risk with what’s left.

K&L Gates, for example, is advising clients to take urgent action to preserve information about their investments, in case sanctions lead to devaluation or even loss of investment – ​​and the case is referred to arbitration.

“Protecting foreign investment in Russia is likely to be a difficult exercise for the foreseeable future,” he warns.